After our last game of Horizon Wars, Eric and I were chatting as it is our custom after games. And somehow our talk turned to the Dig-In rule for infantry and how one could represent it on the tabletop. We did not want yet another bead or plastic marker. Due to the small scale of our Horizon wars miniatures (6mm), your average marker would look oversized next to the element. So we thought, it would be nice to have some kind of marker, that would both fit into the terrain and blend with the miniature.

And out of this chat, came the inspiration for my Dig-In marker 🙂

As base for the marker I used 25mm flat washer. I bought them in bulk at the local hardwarestore when they were at a reduced price and are my go-to-base for smaller terrain features and clutter.
I wanted to be able to place my HW-infantry elements behind some kind of earthwork.
So I drew with a marker a line to separate the areas of the washer where the miniature will stand and where the structure will be added.
Hint: be generous with the area, which will remain empty. You don’t want to find yourself with pretty markers, that are to tight for your base.

As mentioned before, I wanted the marker to look like improvised earthwork.
In a first step I used superglue to put a first layer of small stones onto the base. They will give the the earthwork their basic shape. (picture 1-L)
I then added several layers of fine sand to give it its final shape. I applied the glue and the sand randomly, hoping it would look as if it were dug up hastily. (picture 1-R)
To emphasize the “trench”-look of the earthwork, I wanted to add some wirefences. I am fully aware, that an infantry platoon does not necessarily carry wirefences with them… but hey… it’s a marker in a game of imagined war 🙂
Another covid-related buy was some fine gardening wire (picture 3) for orchids and bonsai. I cut a small piece down and wound it around a toothpick. I then cut it to sice and glued it on a few of the markers. (Picture 2)
This part took the longest I found… mostly because I glued the wirefence constantly to my fingers instead to the marker -_-

The paintjob on this was fairly quick and easy.

I first primed it with black spraypaint and let it dry.
Then I gave it a coat of varnish. I was not sure if the coulors whould stick well on the slick surface of the washer. So I varnished it before the next painting steps in order to avoid chipping in the future.

I then covered the entire build (earthwork and wirewith) the first base colour. A dark brown with a greyish hue. Later, when the metal colour will be applied, the brown will look like rust and dust on the wirefence (so I hoped).

Next I added some ivory to the dark brown to get a lighter tone and used it to drybrush the earthworks. I was very careful not to get the lighter brown on the the wirefence.
I repeated this process another time before highlighting some areas with pure Ivory.

Finally I used a very dark metal colour for the wirefence. I added it only on the very elevated areas.

I was debating with myself, if I should apply some dark wash to make them look grittier. But I decided against it, because I feared the small scale of the earthwork would make it look too blobb-like afterwards.

VOILA : a very fine marker for my very gallant Horizon Wars infantrymen to hide behind them.

The whole process took no more than an evenings work. Happy crafting 🙂 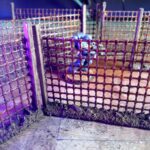 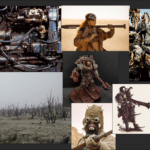 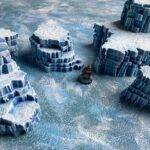