With the holiday season upon us, we got together and we played a four player Frostgrave Christmas Mega scenario. Jingle spells, jingle spells, kaboom your face away… is our first (un)official home-brew scenario for Frostgrave.

Mostly it is an opportunity to pass time with friends in these crazy times and worry about less terrifying things than reality.

As winter encroaches frozen Felstad, the days grow shorter and the nights colder. Many travelers, mercenaries, adventurers and of course a legion of wizards brave the growing cold in the many enclaves in and around Felstad.

For a while now, you hear strange rumors and stories around the fireplaces and in the drinking halls. Stories of treasures miraculously appearing in ruined houses in a northern district of the city, only to vanish a few days later. Spirits and creatures of unfamiliar shapes and behavior appear for a few nights and mysterious stars illuminate an oddly sparkling snow. Orbs of unknown purpose and origin cast colored reflections on ruined walls and the air smells of… cinnamon and conifer. And, so people say, all these occurrences only happen at the height of winter.

Of course, as any sensible person would, you reject these stories as mere humbug. But before long, you learn of wizards, some of great renown, move out into the snow, investigating whatever haunts wintry Felstad. But all trace of them is lost, until one day, a wretched man appears in your tavern. He mumbles something about a powerful treasure hoarding spirit of old, whose riches and secrets spill into our world as the fabric of space and time weakens at the end of the year.

Tired by the endless rumors and fearful there might be an ounce of truth to the peculiar stories, you mount a great expedition to figure out what the Deuce is going on.

When you arrive, you notice you are indeed not the first explorer up north. From an elevated vista, you notice an old camp in one part of the district, some ruined mansions whose chimneys still tell of their former grandeur, a grand plaza overgrown with conifer and a peculiar cottage on an elevation at the far end of the district.

As you take in the view, one of your scouts calls for your attention. Something else is moving in the district and it is not one of the usual denizens of the frozen wastes.

We fielded our four warbands led by a Witch, a Necromancer, an Illusionist and an Elementalist. After setting up the table, two warbands set up at the middle of the long edges and two in opposite corners.

The table was filled with the usual assortment of Felstad ruins. Some elements have been especially made for this event, e.g. the chimneys of the brightly lit up conifer. Of course they will find use in other games too.

The main goal of the game was to banish the dreaded Winter Spirit. In order to do so, our brave and wise mage had to collect hints in order to identify the Spirits source of power. Obviously this would not be an easy task, since the Winter Spirit has his own entourage of Festive Imps (aka demonic Christmas elves) or fearsome Gingerbread Warriors.

The source of power was either the conifer in the center, the cottage in one corner or the campfire in the opposite one. It would be randomly identified during the game. To do so, the wizards and their warbands would have to collect hints (represented by tiny Christmas presents) while fighting of the many threats on the field.

The Winter Spirit appears out of a chimney. His bearded (not so) jolly face turns towards the ruins of old Felstad. One must wonder who is on his naughty list. The dreaded Spirit would stalk the ruins and hunt for lone adventurers. If it is too crowded for creepy Santa, he will vanish and re-spawn at another chimney.

All four warbands make haste to find most hints and treasure, as more and more minions of the Winter Spirit appear at the board. Who’d have thought that Imps would spawn from the broken baubles… ? Certainly not the Witch and the Necromancer who involuntary spawned fiends from the Abyss. Destroying too many baubles seemed to weaken the veil between the real world and the Abyss. Luckily the Necromancers warchicken Bakâk made quick business with the Imp by picking out his eyes.

Indeed, the baubles, the bizarre locations, the festive Imps and their master, the Winter spirit were not of this plane. They certainly came from a demonic Abyss. The Witch, with her witch-crafty art, was the most apt to face the evil fiends, since she could also control demons.

The Witch and her crew were the first one to enter the unholy circle of conifer trees and attacked the mischievous Christmas Elves. This at with a heavy price. The merrily clothed creatures from the Abyss took out the war-racoon and killed a thug. Even though the Witch, her animal companion (a polar bear) and the Captain killed many Elves, the tree just kept spawning new ones.

Meanwhile the Necromancer and her warband, Arthrose the Elementalist and Fizban the great Illusionist were advancing towards the center of the board, hoping to assist the Witch in her search for hints.

Having survived a previous encounter (and an arrow in his shoulder by the Elementalist’s Marksman Rudolf Gutrechtson), Pritt escorts Patsi the pack mule to some of the treasures. Fizban the Illusionist would not leave the field without some treasure, no sir. With the Winter Spirit chasing the Necromancer and his minions at the other side of the field, Pritt and Patsi had no real obstacle for a while.

Knowing that some nasty creature would spawn at the bauble, Fizban summoned an imp next to it. Umberto Widerhal, the Illusionist apprentice then cast Mind Control on that very imp to get it to activate the bauble, thus claiming a clue token and luring the monster unto the imp. Why getting his hands dirty?

Soon the unholy grounds were crawling with beasts and critters.

The dice gods decided to punish our valiant wizards for their hubris. The random encounter table summoned bears, spiders an entire menagerie of undead and constructs on the field. These new threats, with the Gingerbread Warriors and the festive Imps, made the job harder.

The table soon turned into a chaos of carnage and running people… and the permanence of Christmas music.

Aside the usual monsters on the field, our warbands had to face the constant threat of the Winter Spirit.

The Winter Spirit, with his dice-decided 39 HP, was a terrible foe and commanded the necessary respect… i.e. we chose flight before fight. Unluckily for the Necromancer, our opponent spawned in her starting zone and by chance of dice never really left it. So the Mistress of the undead took it upon herself to keep the Winter Spirit busy, while the rest of us looked for hints.

During mid-game, almost every area of the field saw some action. Aside from the main objective, every warband seemed to follow its own agenda.
The Witch continued to raid the festive tree and other treasure on the field, inadvertently disturbing some of the many critters, beasts and fiends roaming Felstad.
The Illusionist, having entered the game in the far end corner tried to take out the undead at the camp, while making a run for the center in order to assist his spell casting colleagues. Bingo, the master-thief braved the odds and snuck up some ruins to claim loot.
The Necromancer, having started close to the Winter Spirit, went both after the evil fiend and the shining baubles. Scottex, her captain, led a team against the Festive Imps in the center, clearly not letting the witch claim all the presents.
Finally the Elementalist led his merry band to the cottage and faced the dreadful Gingerbread Warriors. 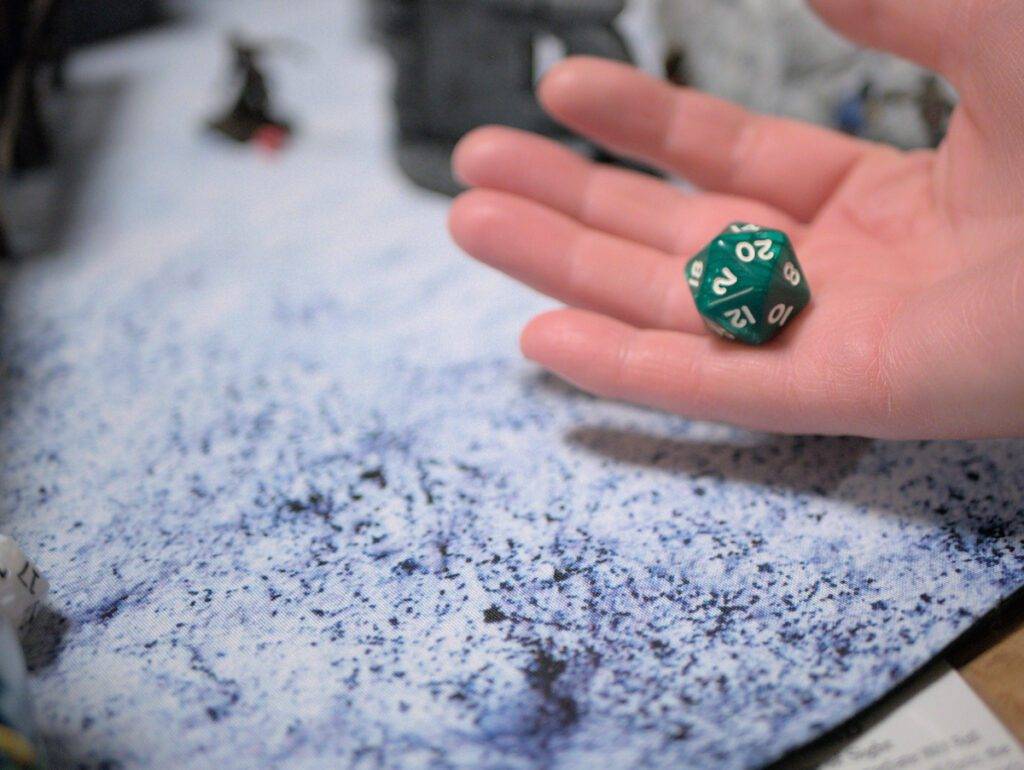 In the End, the Witch managed to locate the Winter Spirits power source. Luckily it was the cottage, where the Elementalist and his soldiers, and half of the Witches minions were battling the Gingerbread Warriors. We proceeded to neutralizing the source and beating the Winter Spirit who now was bereft of his powers.

As mentioned above, this was our very first home brew. Playing through the scenario showed us, that there is still some tweaking to be done. We found it easiest to play it Coop instead of PVP.
While writing the rules and pondering about most of the random events, I might have overdone it with the difficulty level. Also the means to gather Intel might have been to cumbersome and tedious. Having wanted to allow chance and the dice-gods to dictate the key elements of the game, I lost focus on game-play and smooth playing. That should have been fixed up to a certain degree (for our purposes). But as with everything in our hobby: there is a learning curve and every new project has its own challenges 🙂

As for a proper Christmas event, food and drinks were plenty. From Champagne, mulled wine to home baked cookies and Lasagna, we left the table with treasure, XP and a full stomach. 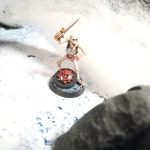 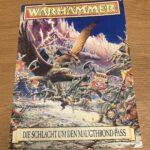 The Battle for Maugthrond Pass – Part 1 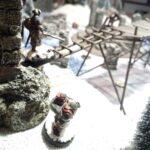 The Well of Dreams and Sorrows