Being stuck between two enemy forces is a challenge for even the most veteran of armies. The defenders must try to break out, whilst not fully giving up their position to the enemy, which comes crashing down on both sides.

After our undead battle, we immediately carried on with the next 1000 points One Page Rules Age of Fantasy battle, namely Havoc Warriors vs. High Elves using the Hammer & Anvil scenario.

In this One Page Rules scenario, there are no objectives to claim, but victory points are awarded for having units in the opponents deployment zones, of which there are three: one in the middle for the defender and two on both short edges of a 6 x 4 table. We received bonus points for eradicating the opponents most expensive unit and for decimating the enemy army to half or less of its units. The High elves turned out to be defender and the Havoc Warriors the attackers.

The Hammer and the Anvil

In the last round of the Hammer & Anvil scenario, on a pretty empty battle field, the Havoc Master Sorcerer was able to kill that last elf standing, making this game of One Page Rules end in a draw. Again.

In conclusion we quite enjoy playing One Page Rules with their scenarios available on their Patreon or at Wargame Vault.

In the end we spent a great Sunday afternoon playing One Page Rules Age of Fantasy. We also enjoyed David’s delicious spaghetti for dinner. 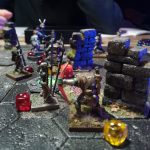 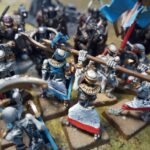 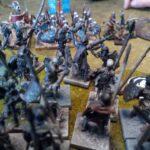