At the end of 2022, Osprey released its newest installment of their “Rampant Wargaming Series” with Xenos Rampant by Daniel Mersey and Richard Cowen.
As it happens, it was Christmas and our Club was all nice and kind this year, so Santa gifted us with brand new copies of Xenos Rampant “Science Fiction Wargame Battles”, which we promptly decided to test and review. You can find our first Xenos Rampant battle-report here.

Note: For the sake of this review, we will often compare Xenos Rampant to it’s “historical” cousin Lion Rampant, since we are most familiar with the latter. Also, the second edition of Lion Rampant has been recently released and is its closest and best known counterpart.

1. What is Xenos Rampant?

Previous games like Dragon Rampant (2015), Lion Rampant (2nd ed. 2022), The Men who would be Kings (2016) and others take place in either an historical or fantastical setting. Xenos Rampant however opens the Rampant universe to the other end of the spectrum, i.e. modern and science-fiction wargames.

Xenos Rampant is (as advertised) a fast paced science-fiction skirmish game. Unlike many games, Xenos Rampant does not impose a specific setting or universe where the action takes place. Instead it provides players with an “open” game system and the freedom to adapt the setting, stories and so on to your needs and fancy.
Like many Osprey games, Xenos Rampant is miniature agnostic. So if you want to use your 90es Grimdark miniatures or your shiny new multipart plastic soldiers, you are free to do so. Heck, send your Klingons on the Nostromo to Mars and slaughter some Ewoks, if you are into that kind of crossover 🙂

As a collector of rulebooks (yes, that is a hobby of mine), I have to talk briefly about the rulebook itself.

Xenos Rampant comes as a 192 page full colour hard cover book. As one is used by Daniel Mersey’s books, the inner structure is very comprehensive. The book is divided into different sections, covering the basic rules, special rules, scenarios, appendices and an excellent quick-reference section.
The text itself is well written and easy to understand (being a non-native speaker, I am grateful for that 😉 )
Some game specific terminology, like “suppressed” instead the usual “battered” or “shaken” I am used to, take some time to sink in. But I managed to maneuver through De Bellis Antiquitatis, so I might be able to handle unfamiliar terminology 🙂
The many easily accessible tables and schematics, as well as the regular rules summaries in the book and an excellent quick-reference section are a major plus. Also the table of contents (in comparison to other rulebooks) is well structured and allows to move easily through the book and find that one specific rule you are looking for.

The book includes numerous photos giving you examples of unit types or models that could be used. The artwork is nice and adds flavor to the sci-fi-esque background of the game.
That said, I miss the kind of coloured illustrations I am used to from Lion Rampant. But I am rather fond of Ospreys signature illustrations and their particular “clean” artwork.

Obviously we do not want to (and cannot) recite all the rules for Xenos Rampant in this review. You’ll have to get yourself a copy.
But for those unfamiliar with the Rampant-Games, we wish to briefly present the game mechanics.

Xenos Rampant is usually played on a 4×4 table. You field “detachments” of 20 to 50 models, divided into a handful units. Winning conditions and game length are mostly determined by the scenario.

Players alternate activating their detachments. Depending on the scenario, deployment-order and first player-order may change.
Player unfamiliar with games like Lion Rampant, may find the activation of units somewhat peculiar. Instead of simply activating a unit (as one might know from most games), you have to roll dice and check, if the unit activates or not.
For example: my sniper sit in their hideout and are ordered to shoot at an approaching fire-team. I roll my dice, and I fail the activation roll. The sniper team keeps on eating bisquits and are eventually killed. As it did happen to me… repeatedly…

The actions, a unit can perform (and has to roll for), are pretty straightforward : attacking, moving, shooting and testing morale. Each unit has its own activation values, mostly depending on their quality.

Units may move freely according to their movement range. There are no facings for most infantry and your models may move in any direction.
Combat and Shooting are based on “to hit”-values and allow for rather quick engagements. You roll your dice and count your hits… easy.
As in almost any wargame, the dice decide on success or failure and the many funny events that take place in-game, like your best troops running from some space-cauliflower (aka the Super Soldiers of the Star Alliance trade corp.).

Most rolls are made using a fix number of dice, depending on the status of your unit. Aside from reflecting the strength of your units and this mechanic avoids the cumbersome counting of models to determine the number of attack dice.

Most notable changes to previous “Rampant”-Games

For veteran players of Lion Rampant or its fantasy equivalent, Dragon Rampant, we take the liberty to evoke in our review some of the notable changes in Xenos Rampant.

One of the major assets of the Rampant-series are its use of generic unit types. Xenos Rampant offers 10 different types of infantry (including aliens/xenomorphs) and three types of vehicles.

These units cost (obviously) some points according to their quality. Every unit type comes with it’s own set of special rules and a selection of options that can be “bought” in order to customize your unit.
Additionally the game includes a set of options called “xenos rules”. If the aforementioned options reflect a more “real life” and simple kind of special rules, then the xenos rules represent the science-fiction shenanigans you bought the book for. They cover everything from space opera-technology, to mutations, psychics and even demons…

In the end, you may create your very own Star Trek crew and fight the xenomorphs from Alien. If you like this kind of customization, logistic and planing, then Xenos Rampant is heaven to you.

Osprey offers a free detachment roster and the QR sheet on their site. You can find it here.

As most game systems, Xenos Rampant offers a campaign system, that actively encourages you to play through its use of a reward system. After each game, your commander is earns career points which enable him progress and earn new skills.
Commander traits (as they are called) may have direct or indirect impact on the game. Some allow you to do re-rolls, while others impact deployment and so on.

The rulebook does not include specific campaigns. You may either link the scenarios from the book (see below) according to the story you tell, or you determine them randomly and play them in no fixed order.

Xenos Rampant offers a series of twelve scenarios. They may either be played individually or in a campaign. Each scenario has its own background and special rules for set-up, deployment and game events etc.
If you play them in a campaign, the outcome of the scenario might affect the next game (extra points, special advantages for the victor, etc…).

The scenarios cover most of the encounters the average wargamer is familiar with: random skirmish, ambush, capturing certain points/objects of interest…

Now this is a fun section of the book to read. The authors were kind enough to provide the players with several genre settings and appropriate special rules or extra scenario elements. Here are some examples:

Obviously, not every setting is to everyone’s liking. But in general, they cover the most common tropes of the science-fiction-genre and are an excellent incentive to (as they say) write your own story.

Since we were already somewhat familiar with the basic principles of the game from Lion Rampant, the game mechanics were fairly easy to handle. Of course, we had to get used to the many special rules for our units. For me, it was very tempting to buy this and that option while preparing my detachment.
We fielded two entirely different detachments. Eric massed a great number of units, mostly cheap Light Infantry, while I relied on fewer but better, more expensive and upgraded units.

It took some time to adjust to some of the rules changes. For example, when testing morale (courage) we found ourselves often think in Lion Rampant terms, but we soon adapted.
The utterly new rules for vehicles took us a few turns to grasp, since they behaved slightly different to Infantry.
We did not try out the psychic rules (yet), but we are looking forward to it in future games.

The use of ranged weapons was a bit frustrating for me, since to-hit values are often quite high and the dice gods were not in my favor. But what we greatly appreciated, was the firefight-special rule, that allows a unit to react at a shooting attack by firing back. One can easily imagine the two units firing at each other, while going into cover or trying not to be killed otherwise.

A full battle report can be found here.

The generic aspect of the game, i.e. the freedom to create your own units and settings is one of the most appealing elements of the game. Being miniature agnostic adds even more to this freedom.
For people who like modern and/or science fiction, this game will allow you to play in your favorite setting, be it your own creation or your current fandom.

Once you get used to the game mechanics, they prove to be fairly simple and make the game accessible for both the veteran wargamer and new players.

We certainly enjoyed playing Xenos Rampant (and will certainly do so in the future). 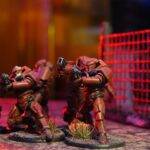 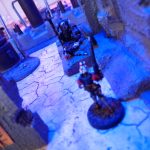 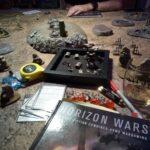 Many points on a distant moon… A Horizon Wars battle report