Last Saturday we played Scenario Alpha “Sweep and Clear” for Osprey Games’ Xenos Rampant. For thise who don’t know or haven’t played it yet, we wrote a review of Xenos Rampant. Besides our first game of 2023, it was our first time playing Daniel Mersey’s and Richard Cowen’s new game Xenos Rampant. We used to play Dragon Rampant in the past and more recently fought some Dark Age battles using the new Lion Rampant 2nd Edition.

We decided to prepare our armies using miniatures we had laying around. David added more troopers, as well as a mech (which wasn’t use for this game), to his Imperial Commonwealth army. The figures are mainly from Wargames Atlantic. I dusted off my Algoryn army for Warlord Games’ Beyond the Gates of Antares to use in my Star Alliance army.
List building went pretty smooth, until I discovered the Xenos update “Combat Medic” to apply on my Light Infantry medic team. You can find excellent form-fillable PDF army sheets directly on the Osprey Games website.

The first mission is pretty straight forward. It’s basically a kill as many opponents in order to gain points bases on a unit’s strength value. The action takes place on Golbazar, a moon surrounding a Jupiter-type gas giant in the Astara system. We used Matt David’s Books of Random Tables: Science Fiction 1 & 2 to come up with some random names. Golbazar is known to be a former trade post along the Astara-Alpha route. The Star Alliance trade corporation wanting to expand their empire, are of course eager to control Golbazar and add another node to their vast network of interstellar trade routes. The Imperial Commonwealth trying to maintain order in this part of the galaxy and after having had some intel on foreign activities in the sector, immediately sent out forces to drop on Golbazar’s surface.
Just in time!

We deployed our forces on the 2 long edges of a 6 x 4 desert gaming mat covered in lots of ruined city structures. David’s commander rolled the “Unpredictable” trait and I did the “Extreme Disciplinarian” aggressive trait.

Having won the initiative meant David’s troopers were deployed first as defenders. I deployed my Star Alliance trade corp. next. As attacker, I was player one.

I let my soldiers charge from cover to cover to the center of the battle field in order to shoot at the Imperial Commonwealth. The latter ones were taking position behind cover in order to shoot back using Xenos Rampant’s reaction rule Firefight.

The center of the battlefield was quickly locked in a deadly firefight from cover to cover. On the right side my Support Infantry brought a mortar in position to shoot on the opponents sniper team on the roof of a ruined trade building. At the same time three light Infantry and my flying Fighting vehicle advanced towards the front, but slightly off the center in order to attack the opponents in their flank.

In the 3rd round all units were locked in firing combat.

In the heat of the battle

I moved all my troops forward as close as possible to the enemy, due to reduced weapon ranges.

After heavy shooting, and the Imperial Commonwealth having destroyed my Elite Infantry and my Commander, the fight was taken to close hand to hand combat.

The Imperial Commonwealth troops reinforced their positions and continued firing at my Star Alliance soldiers.

At turn 5, we had to roll a D6 to determine whether the game ends or continues. I went on 2 more rounds. Round 6 was marked by a last effort to kill as many opponents as possible.

In round 7 we didn’t want to loose any more soldiers and thus moved our troops behind cover and into relative safety.

That left both of us with 5 victory points each and thus the game ended in a draw.

Stay tuned for more Xenos Rampant in the future as well as a review of the rules. 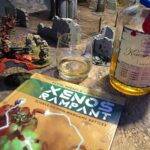 Battle around the moon