In their quest for power, secrets and riches, the mages Fizban and Arthrose meet yet again in old Felstad. Both were lured by rumors of arcane secrets lying dormant in the old laboratory of Wigruman the pale, an archmage of old Felstad.
His lab is known by the many explorers of Felstad as the “silent tower”. A null field of unknown origin lingered over the tower, thus the name, making the use of magic utterly impossible.
When both parties arrived at the tower, they were amazed to see, that they were not the first to try to access the tower. Other explorer and soldiers of fortune already build scaffolds and access ramps leading up to the tower. But something must have gone wrong , since the tower seems unbroken…
First both mages could not believe their luck. An unopened lab and the means to access it… But soon they realized, that the nullfield extended itself along the scaffold and walkways to the neighboring buildings, annihilating the mages’ capacity to wreck havoc among the opposing warband.

Thus begins another game of Frostgrave: The Silent Tower

Two enter, how many do leave?

Since their magic has become obsolete, both mages must now rely on their “loyal” warbands. Ironically, in an age, when the arcane arts have become the go-to-method of solving problems, both mages have to rely on the mundane, worldy and un-magic warriors and their proficiency for brute force.

foes and fauna of old Felstad

As both warbands ventured closer to the tower and looted many treasures, other inhabitants of the ruins felt somewhat disturbed by the intruders. The weird, the undead and the hungry start stalking our brave warbands.

As the skirmish neared its end, most of the fighters were down or managed to leave the area with some treasure.
Although Fizbans men managed to knock out more oppenents, Arthroses warband could claim more treasures.
Sadly , the expected treasures were only slightly magic items. After careful examination, Arthrose concluded, that the nullfield must have soaked up most of the items magic energy…
The fight left two, Chastity and Sir Naith, badly wounded and shed little treasure.

Thus ends another encounter in the frozen wastes of ancient Felstad set in the fantastical setting of Frostgrave. 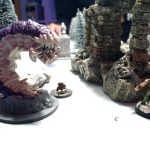 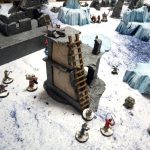 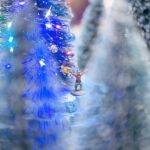