I recently bought a box of the new Necromunda Ash Waste Nomads War Party. After all I got it for 13,50 € brand new. I decided that 1,35 € per miniature was worth the spontaneous purchase. Plus it’s a welcome change after only painting 3D printed miniatures for a very long time.

Nomads of the Ash Waste

Whe I saw the box, immediately this image popped up in my mind:

I don’t play Necromunda or Kill Team or Warhammer 40.000. Instead I immediately thought of building a Hive City Gangs Warband for One Page Rules Grimdark Future Firefight. My intend is top use them as another one of my several 250 points warbands and as an enemy warband for playing solo. After I checked their website, I then realized there is already an alternative option for the Ash Waste Nomads : “The Nomads“. They have a limited choice of units, but I decided that a Nomad Champion, Waste Nomads and Ash Nomads . So I headed to their online army builder app and created my list.

Let’s have a look at the box and its contents to see what I can build using the One Page Rules.

The next step is to free the Tusk… Nomads from their grey plastic prison (sprue) and glue them together.
I’ll explain this in part 2 of the series.

The plan to bring my Nomads to life

I’ve planned to outline the series in 5 parts as per my usual approach when painting miniatures, especially warbands and armies.

First I see (a) miniature(s) and I get a rough idea based on some image in my head. Then I’m motivated to start a new army, unit or simply add another figure to an existing troop. Obviously the assembling step is only needed for multi part minis as it is in this project. For me it’s crucial to have assembled miniatures in front of my in order to proceed to the next part, namely to tie them to a narrative, to “breathe life” (figuratively speaking of course. No pun intended.) into them by developing a concept around them. Once I get a grip on where I’m headed with my concept and a rough paint scheme, it is time to move to the main part of painting miniatures: painting of course. After that step I normally come up quickly with a basing idea to finish the models. 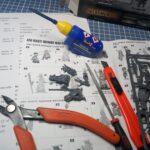 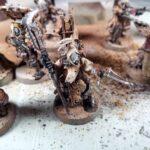 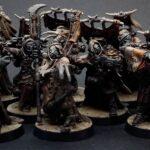