The relentless summer sun bakes the already dried up ground. Hot wind from the inward land blows over scorched plains. Crickets are chirping away in a seemingly never ending cacophony. The nearby Mediterranean sea promises only a faint hope of fresh breeze.
The year is 211 BC. We are in the midst of the 2nd Punic Wars somewhere on the Mediterranean coast close to the Roman Empire. Confrontations between Carthage and Rome are a common occurrence these days.

Thus 2.233 years later during a hot summer night in our subterranean gaming tavern, our 15mm miniature Carthaginian and Roman armies are facing each other in a 2000 points Kings of War Historical battle.

New Kings of War Game board

Since we’re playing in 15mm scale and use centimeter instead of inch for distances, we decided to play on a half sized gaming terrain: 90 x 60 cm instead of 180 x 120 cm. Years ago I build a small gaming mat above all for our 6mm Seven Years War games of Black Powder. A felt closet inlay from IKEA (Komplement Drawer mat) was used with brown and green colors and flock on top to recreate a generic grass field. It’s the first time we used it in a game to test it. In fact it works very well for scales from 15mm and below.

Eventually first casualties, like the Carthaginian chariot which never managed to do any damage, started to appear and as can be seen three clusters of engagement started to appear with two on each side and the main one in the middle of the battle field.

Then, mid game, the battle becomes more melee heavy as units start charging each other. Casualties are thus reported on both sides with a higher death toll on the Carthaginian side.

Then the elephants entered in melee contact with the Romans and all of a sudden the tides of victory seem to change sides to the benefit of the Carthaginians. As a consequence the elephants are taking out several of the already wounded Roman units as shown below.

The Kings of War

So, after a tense battle where the prospect of winning changed sides each round, the game concluded in a tight victory for Carthage after 6 plus 1 rounds. We then counted the points of the remaining troops on the battle field. An so the North African Elephants saved the day, again! 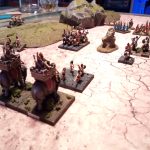 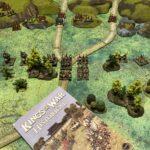 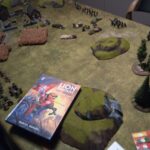 The battle at Wifey Farm